Recently I went on a guided tour of the National Trust for Scotland’s Gladstone’s Land on the Royal Mile. My tour guide was David, our informative and enthusiastic volunteer . He gave us fascinating facts, stories and insights as we walked through this 17thcentury tenement.

We started the tour outside, under Edinburgh’s only surviving 17thcentury arched store frontage.  It’s quite something to imagine the hustle and bustle of Edinburgh in the 1600s. People would along the markets on the mile and buy their wares from under these arches.  There was a quality grocer and a cloth shop on the ground floor. The basement housed a tavern – I suppose the equivalent of our coffee shops today – especially people thought beer was safer than water!

My first discovery was just how crowded the Royal Mile was at that time.  It was very much des res for the wealthy, at least on the middle floors, with the poorer taking up the top and bottom floors.  Gladstone, however, built his land for rich tenants, as you can see by its opulent décor.  The extensions along the narrow closes were testament to the shortage of housing and the desirability of the area.  This six-storey building was once considered a skyscraper. Later, buildings of thirteen storeys extended down the steep banks towards what is now Princes Street gardens. The difference in population density between the upper and lower halves of the Royal Mile is quite stunning.  People wanted to live near the Castle, in the Lawnmarket, because it was within the city walls. Down towards Holyrood Palace was the Canongate, and it wasn’t part of Edinburgh City.

When merchant Thomas Gladstone built his tenement block for rental, it was not only a sign of his commercial success (and fortuitous marriage!) It also qualified as a very Nice Little Earner! Edinburgh was at one time the most densely populated city on Earth!

Stepping back in time

Inside the building, the painted ceiling beams are vivid and clear after many decades hidden from daylight by plaster coverings.  There are still a few wall drawings to see (found underneath 14 layers of paint!) The NTS has made some new impressions to give a better idea of the surroundings.

The number of people living in such small spaces is hard to conceive of by today’s standards, especially given the lack of running water and sewage facilities.  The stories of  “Gardyloo” give a quite different meaning to Edinburgh’s nickname of “Auld Reekie”.

Changes as the New Town develops

There’s also a room that goes “forward” in time to the 1800s. Most of the wealthy had decanted to the New Town to the North of Princes Street, but some still kept a pied-a-terre for business purposes.  Quite a change in lifestyle – but not for the poor who were left in the Old Town as it became more and more cramped and squalid.

I’ll not steal David’s thunder by telling his stories. But finding out about Witch Prickers, open plan loos and strangely designed footwear are just some of the reasons to visit Gladstone’s Land.  There’s also a link to the Darien Company, whose failure led to the 1707 Act of Union between Scotland and England.  Thank goodness the National Trust for Scotland rescued this building from demolition in 1934!

Gladstone’s Land is a short 19 minute stroll from Anthemion Apartment Edinburgh, or you can go by bus in 13 minutes by taking the 23 or 27.

Visits are free for National Trust for Scotland members.  In high season, it’s worth booking your tour in advance, as places are taken up very quickly. 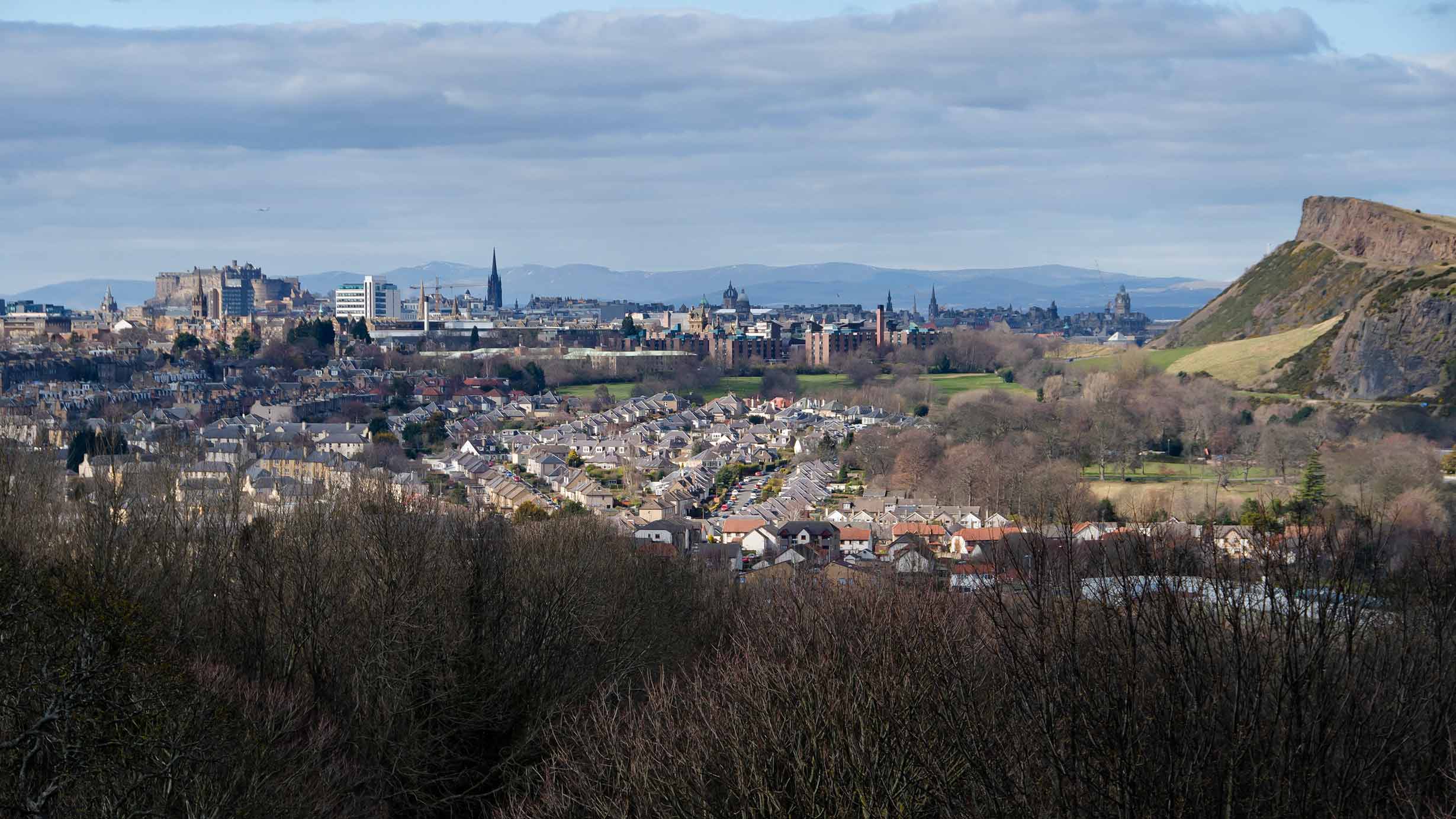 Calton Hill in Edinburgh is at the west end of Princes Street, just a short walk away from Anthemion in New Town, and you’ll get your reward for the wee climb to get to the top. There are a number of historic monuments and 360º views.  It’s an excellent way to get the lay of the land and to see several of Edinburgh’s seven hills.

Make sure you don’t miss a visit to the Nelson Monument. It was built between 1807 and 1815 to commemorate Nelson’s victory and death at the Battle of Trafalgar in 1805. (Around 20% of the military in the Battle were Scots.  10-year-old John Doig from Leith was among them, and was the youngest crew member). The monument sits on the highest point at Calton Hill.  Its original purpose was as a signal mast to the sailors in the port of Leith. As you climb the 143 steps to the gallery at the top, you can see why!

The city fathers discussed the design of the monument at length, and wrestled with the inevitable funding problems.  They finally settled on architect Robert Burn’s design. He modelled the monument on an upturned telescope. The castellations on top of the monument mirrored those of the notorious Calton Jail, which was on the south of the hill.

Money was tight, so when Mrs Kerr, the widow of a petty officer, leased the monument to set up a tea room, she helped provide the necessary funding to complete the job.

In 1853, the city added the time ball. It signalled the time to the sailors who set their chronometers by its rise and fall, and were thus able to calculate longitude more precisely. Originally, the clock in the nearby City Observatory (about which, more in future!) triggered the clock via an underground wire.   The ball rises just before 1pm and falls at exactly 1pm. Because on foggy days the sailors could not see the ball, the authorities established the one o’clock gun at Edinburgh Castle so that the signal could be heard if not seen. The two were synchronised via a very long telegraph wire between Calton Hill and the Castle. For 150 years the ball faithfully fulfilled its role, until a storm damaged it in 2007.

The City of Edinburgh Council and restored the monument in 2009 and the ball was repaired, and you can still see it in operation today.Ritchie & Son Clockmakers have had the responsibility of operating the ball since 1852 and continue to this day.

On Trafalgar Day, 21 October, every year, the city runs flags with the message that Nelson set out at the start of the battle: “England expects that every man will do his duty”. On a slightly more down-to-earth matter, Holyrood Palace has also used flags from the monument when they signalled the cancellation of royal garden parties due to rain!

If you’re fit to climb the stairs, it’s well worth a visit.  The views are unparalleled.  It’s open all year round.