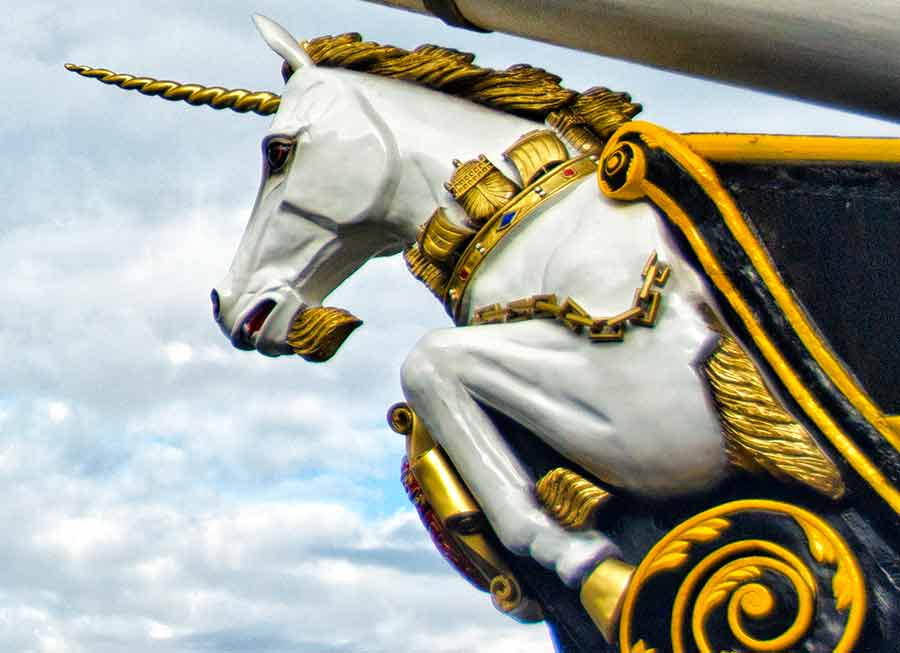 England has its lion, France its cockerel, the United States their eagle, and Scotland has ……. the unicorn!

But why would Scotland make this extremely strange choice of national animal? To find out, we have to go back in time to Celtic lore and legend.   The ancients believed unicorns had healing powers. Throughout the ages, people thought they could purify water, and heal rubella, measles, and even the plague! Although the unicorn symbolised purity and innocence, it also stood for masculinity, power and courage (eat your heart out, My Little Pony!) It was such a free, wild animal that it had to be chained – and only a virgin maiden could tame it! It would choose to die rather than be taken alive. One can see how our Scottish kings would appreciate the symbolism.

In Scottish heraldry, it goes back to the 12th century, when William I used it in his coat of arms. The unicorn was the enemy of the lion – perhaps another reason to keep it in chains.  Might King Robert the Bruce have seen the significance of this enmity when he adopted it as Scotland’s national animal in the 14th century?  The unicorn also appeared on Scottish coins in the 1400s and 1500s.  Then, in 1603 came the Union of the Crowns.  James VI of Scotland, now also James I of England, decided to change the coat of arms.  He replaced one of the two unicorns in his Scottish Royal Arms with a lion to symbolise the unity of England and Scotland.

While unicorn horn isn’t the marketing draw it used to be (in the middle ages merchants could make a pretty penny because of its well-advertised healing powers) we can still enjoy going searching for the motif as we travel through Scotland.  There are several close to Anthemion!And don’t worry if you don’t believe in uhttp://www.anthemionapartmentedinburgh.co.unicorns – gone are the days when Inquisition could burn you at the stake for doubting its existence!

To get you started, here are a few examples unicorns in Scotland – where have you spotted our national animal?